Once you have attended an orthodox Jewish wedding no one would argue with the statement that frum Jews cant dance, although we think we can and this can be witnessed at any frum wedding. Weddings are a time for us frum Jews to show off our poor dancing skills by slapping our feet on the floor in an effort to copy Michael Jackson or waving our hands in the air to do our version of the Yiddisher rave, it doesn’t work, we look like idiots, but its all in good fun.

What kind of frummy dance do you do at weddings?

Foot Slapper:
For some reason the women like this one, this is when you are dancing g in a circle and suddenly someone wants to get fancy, make a move and they start swaying side to side and slapping their foot in the middle of the circle. Girls do it more then guys, mostly because in the guys side there are usually multiple circles going on and ending at once making it dangerous to put your foot anywhere near the circle.

The shuffle:
The shuffle is the most popular dance amongst frum Jews. It is very simple and anyone can learn in three minutes, it makes BT’s and the token secular co-workers feel right at home when they are invited to frum events. The dance is basically when someone rubs their sweaty hand on your back as they sway side to side, I always try to shove the thought what if we were all naked right now, away from my brain because it would just suck.

The Hora:
I have no idea how secular Jews have made the hora look like its some sort of amazing Jewish tradition, its just a bunch of people who wash netilas yadyim instead of with soap after the bathroom spreading their germs around the wedding hall while doing a fast circle dance. Lock sweaty hands with your neighbors and dance around and around until they play that song where everyone starts jumping in the air.

Frummy electric slide:
Have any of you ever been to a frum wedding where the band takes the popular song electric slide and adapts it into frummy music when played with a rock band and full brass section? Then the frummies proceed out onto the dance floor and replay you some bloopers from an old tape of the Backstreet boys practicing their moves. No one has rhythm, its quite funny to watch.

The Rave:
At every wedding there is always some off the derech kid who has to do the rave, the problem is that without light sticks and heavily doped up people it looks really dump, like you were air washing your hands.

The light bulb:
My favorite dance to do by far because its just funny to do. Most people don’t have as many hippie concerts under their belt as me so they stick to the same old twisting in and out of the light bulb. But for me its more then screwing in a light bulb, its about finesse and flowing around like a drugged up Jerry fan.

The twist:
No its not Chubby Checker you douche, it’s the dance if you can call it that, that allows to people to get nauseas and break a leg at the same time, not to mention polish the floor with their butts as well. Usually two men start to twist each other around, never understood how wedding music flowed with this dance, but it happens all the time. 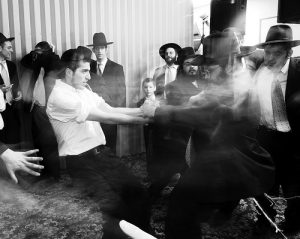 The arm swing:(they banned this maneuver when the banned arm swinging in Lakewood)
This dance requires at least 3 people, usually women who dance in a circle and move to the center of the circle while raising their arms and hands to meet each other. Is there an official name to this one?

The ghetto moonwalk:
They don’t actually do a moonwalk, but a favorite dance during the portion of the wedding when I am eating soup and the chosson and kallah are seating in the center of the men’s dance floor, some of the younger cooler types will slap their feet and slide their shoes across the floor in an effort to be cool – it doesn’t work but its funny, and everyone thinks due to the alcohol served at the chossons tish that this kid has talent.

The jump:
Not sure what song it is, but at al frummy weddings there is one song that gets played and everyone starts to jump up and down like a bunch of Bresslovers.

The body bump:
One may say that this dance has Freudian homoerotic roots, though I hope not. Usually after a few drinks and a few dances a couple of fat guys get on the dance floor and feel the need to run into each other while people dance around them. Once again, we are lucky everyone wears clothing at weddings.

The huddle:
Exactly as stated above the huddle is when everyone locks arms around each others backs and huddles in for the next play in regards for what shtick they have in store. 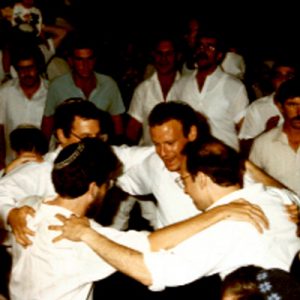 Interlocked hands:
This is when two people lock their sweaty hands together and swing back and forth looking like morons. Sometimes they flap their hands in a motion that seems like they are imitating birds. This dance tends to happen when the chosson gets hoisted onto a chair and someone decides to try to pull him down by locking hands with him and dancing with him – however possible that is.

The garbage compactor:
Commenter Klem pointed out that I forgot this one. This is when 4 guys lack arms and dance up to another four guys who did they same thing. They then go back and forth like they are some sort of human garbage compactor until they realize how foolish they look after about 45 seconds. This dance never lasts too long.

← How do you say ceasefire in Arabic
What is proper mikvah etiquette? →