I admit it, I talk in shul once in a while, but I am not one of those loud rambunctious talkers who feel they have to let the world know about their wife Devora burning the challah or how they got screwed in the market that week, I am not one of those. I usually have a running commentary wherever I go especially shul, but I know how to talk during shul without disturbing, I have manners and I understand the sanctity of the shul, sort of.

What kind of shul talker are you? 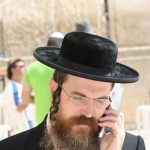 I own this shul:
These guys act like they own the place, upon walking into shul fashionably late, maybe around nishmas on shabbos morning, they shake people’s hands and have small conversations with them, even the folks who motion that they are davening are forced to listen to these shul owners updates of the week. I own this shul talkers are the guys that everyone pretends to be all chummy with, but when alone munching on kichel they love to spew about how much they are irked by them. The rabbi tries relentlessly to knock some sense into these guys to no avail.

Hold on someone is looking at us:
I find that many shul talkers fit into this category; they will talk loudly until they get the stare from the Rabbi or someone across the aisle who is actually in shul to daven. This category of talkers is also of the variety that will stop the conversation when the baal koreh stops laining as a sign of disgust, and as soon as the guy starts up laining, guess who is talking again. These talkers tend to be sitting down during conversations unlike the “I own this shul talker” which does his talking while standing because he has to work the crowd.

Lean on me:
These guys tend to lean over and put their arm around your back and rest it on the bench, it’s a more intimate way of talking and is usually done by people who have secrets to tell or are talking about someone else near by. These shul talker types tend to nod their heads and smile a lot, most likely a cause of the juicy in-shul loshon horah fest taking place.

Wallflowers:
These are the causal shul talkers, they keep it cool by leaning against a wall or a piece of mechitza. They tend to speak a few words to people entering the shul, sometimes these people are the unofficial usher, because how many shuls actually have ushers – I hate shul ushers because they make you sit when you would like to scope out best seats for possible Rabbi sermon exit and mechitza peeping.

Old and loud:
In many shuls there are always a couple of these cute old men who wear their pants so high that if they opened their flies, you would see stomach rather then penis. These guys love to hang over the edge of the pew and point their fingers at people as they talk to them. They tend to talk really loudly and have no idea they are doing it. I was in the Kew Garden Hills young Israel once and these two guys kept making fun of each other that their hearing aids weren’t working.

Body language:
Once in a while you see what appears to be a one way conversation, the guy who the shul talker tried to initiate in conversation pretends he is too frum for shul talk, but in all honesty if he was he could have done one of those really loud nu’s!!! Followed by a sh!!! Or he could have pulled his talis over his head, but no such thing happened. Instead the one guy talks and the other guy davens and talks with body. Sometimes a gasp or a uh huh will exit his mouth as he davens, but most of the time he davens and nods in agreement with the talker.

The pause and talk:
I think I have the tendency to have a running commentary and therefore I tend to say a few words and integrate myself into davening and then talk again. It kind of makes me look like I am sort of talking and sort of davening. It usually happens with people who will not answer back and just chuckle at my random thoughts which are always best during shul.

While the president is making announcements

Upon entering the shul before you find a seat

Anytime you stand up – I call these the stand up talkers

People who talk to their wives over the mechitza – usually to pass things like animal crackers and kids with full diapers.

20 comments for “The different types of shul talkers”