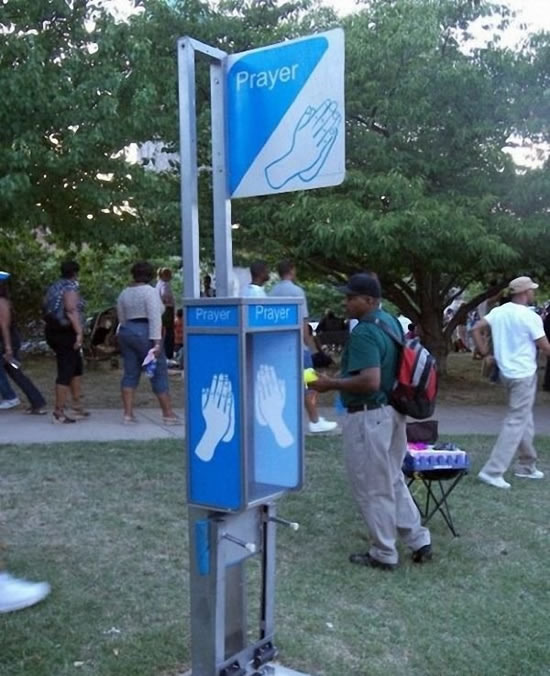 There used to be this story in yeshiva about a guy who was davening in a phone booth at the airport, and all these people were standing around wondering what he was doing because it said out of order. Davening in phone booths is the classic thing to do, unfortunately the phone booth has become none existent with the proliferation of cell phones, and people are forced to do things like pretend to talk on their cell phones or blackberries is funny language in order to daven.

Enter the prayer booth, an artist from Kansas City thought it a good idea to create these public prayer booths in NYC where there was a large Jewish population (nah he had no idea we phone booth mincha prayers existed) but its a great idea.

The only problem is that the two prayer booths he created are located at the entrance to the tram that goes to Roosevelt Island. First of all, I guess he is hinting that prayer will save you in a tram accident, but what was he thinking. Has anyone who reads this site ever been to Roosevelt Island? Exactly, no Jews who would need this the most have ever gone there. I don’t even think theres a Chabad on RI.

In fact I grew up in the city and have never figured out how to drive there, my brother recently rode his bike there and wandered around like a tourist.

28 comments for “Have you ever davened in a phone booth”