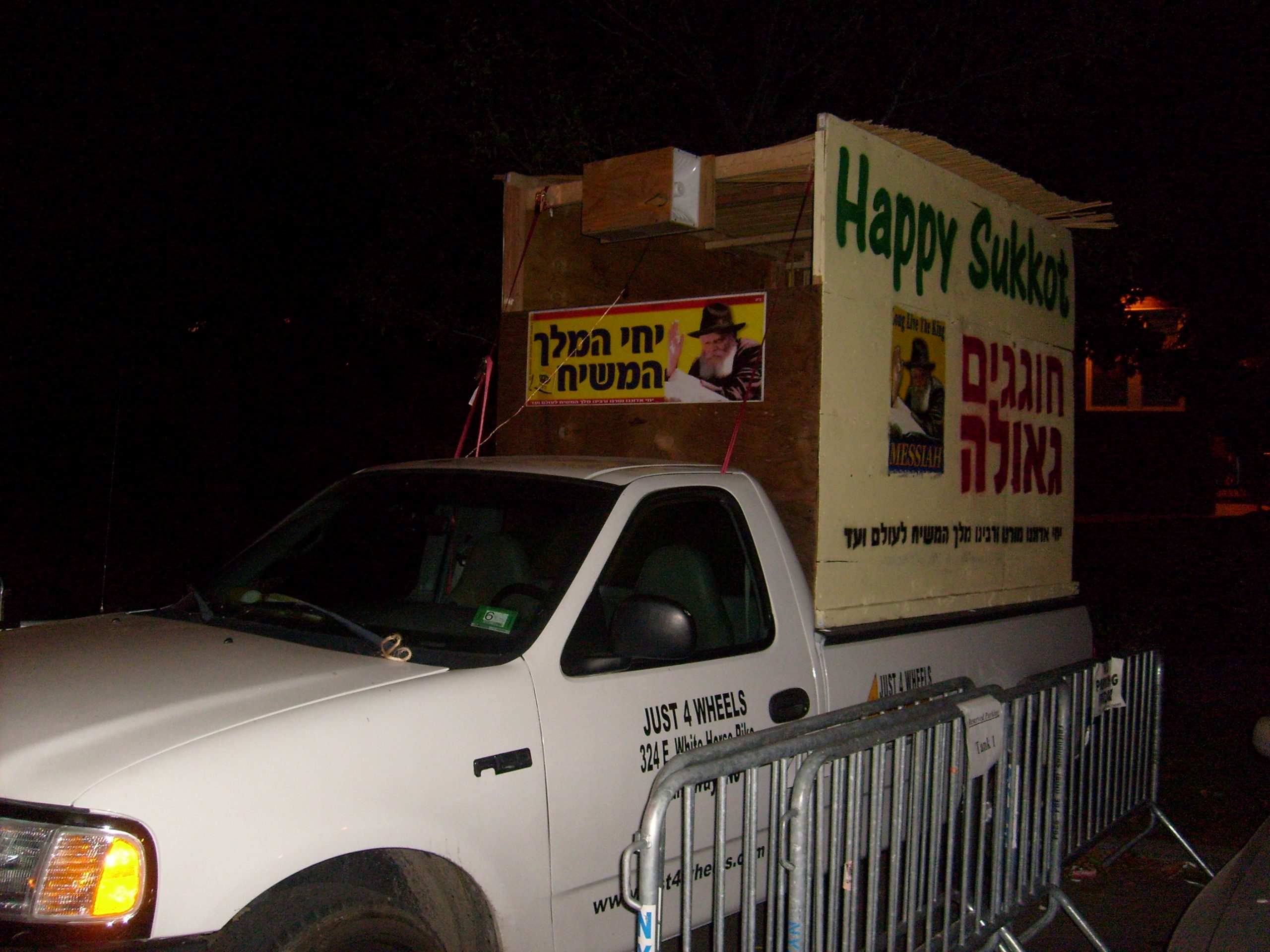 I arrived in Crown Heights at 11:30pm last night, jacked up on an almond snickers bar and some mountain dew I thanked the Lord for convincing me to take a nap earlier in the day so that I could have the energy to drive all the way to Crown Heights at such a late hour. A quick check with Nemo on facebook chat revealed that I shouldn’t miss out on the infamous all night Chabad simchas beis hashoeva. He also mentioned that it wouldn’t be pumping until 1 in the morning or so, so I hopped in my car and sped from Monsey to Brooklyn.

I was at the simchas bais hashoeva in Crown Heights when I was in high school, it was known as a huge hangout and I just wanted to see what went down- so me and a friends went wandering- I bet you if I had a video camera it would have been much more fun. Video camera in hand I set out to check out the scene.

The first thing I started to notice was that Crown Heights is meshichist territory, being that I am mostly exposed to the anti-yechi crowds of upstate NY I started snapping pictures of everything that proclaimed the Rebbe zt”l is not only alive but is the moshiach. Big signs on the buildings, yarmulkes, flags, even the soda guys were yelling yechi to hawk their goods. I found it all a bit disturbing as many of you would have I am sure.

Most disturbing of all was the yechi paraphernalia tabel where they had everything you need to tell everyone that you are a messianic chabadnick. Flags, bumper stickers and rebbe water! First there was vitamin water- then there was rebbe water. Actually it was water from the rebbes mikvah, disgusting I know- but it was being sold right there next to the yarmulkes and rebbe wine. I wonder if they sell used paper towels and half eaten falafel that were eaten by the rebbe of course. 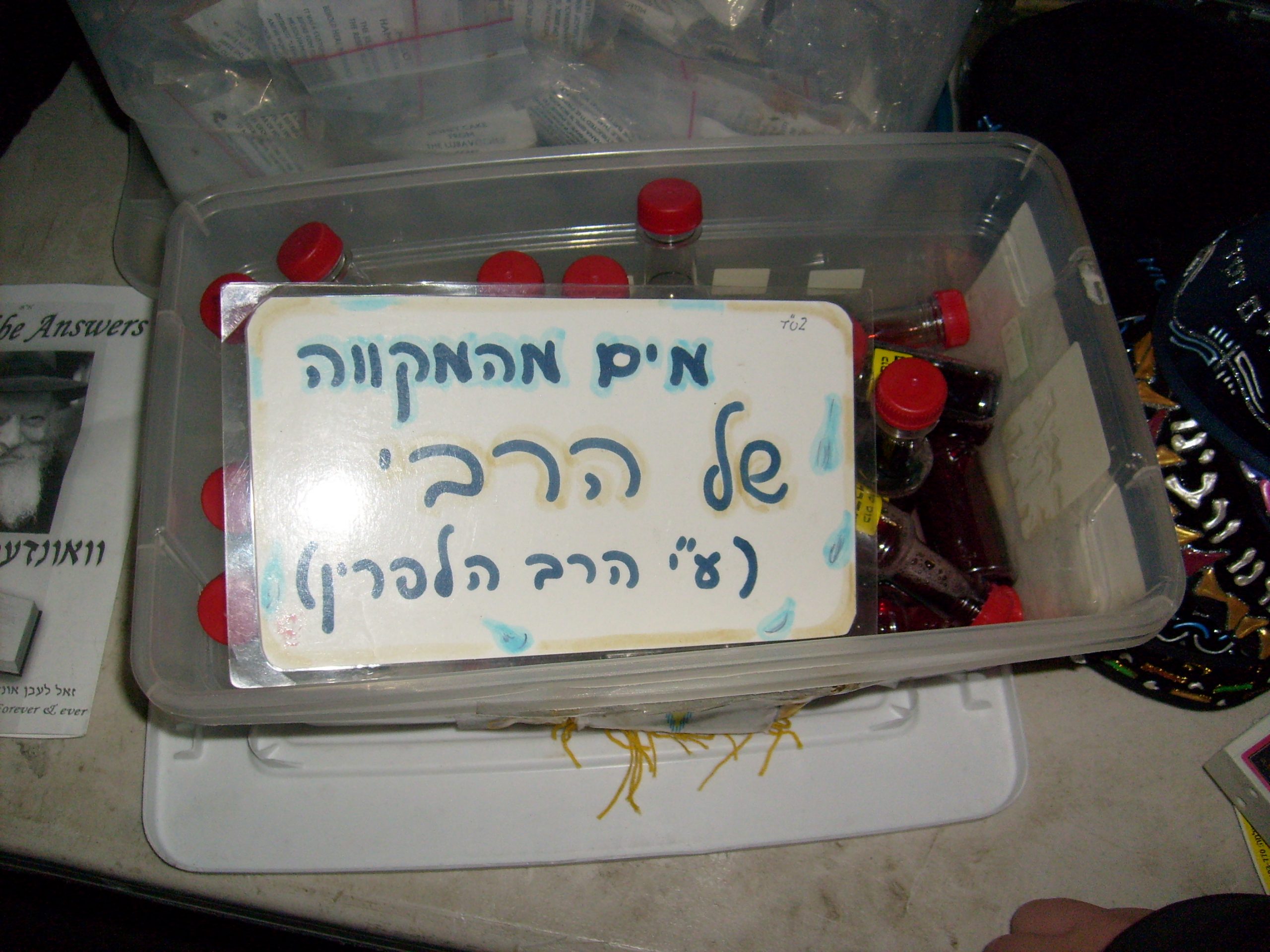 I did notice a lot of non-chabad chassidim rocking the streimels, spudicks, up hats and peyos. I thought it was a great mix and especially nice to see greasy yeshiva guys dancing with chabadnicks and satmar looking dudes. Achdus was in the air, and the night was just beginning.

Non-chabad chassidim thinking about crossing over to the yechi side: 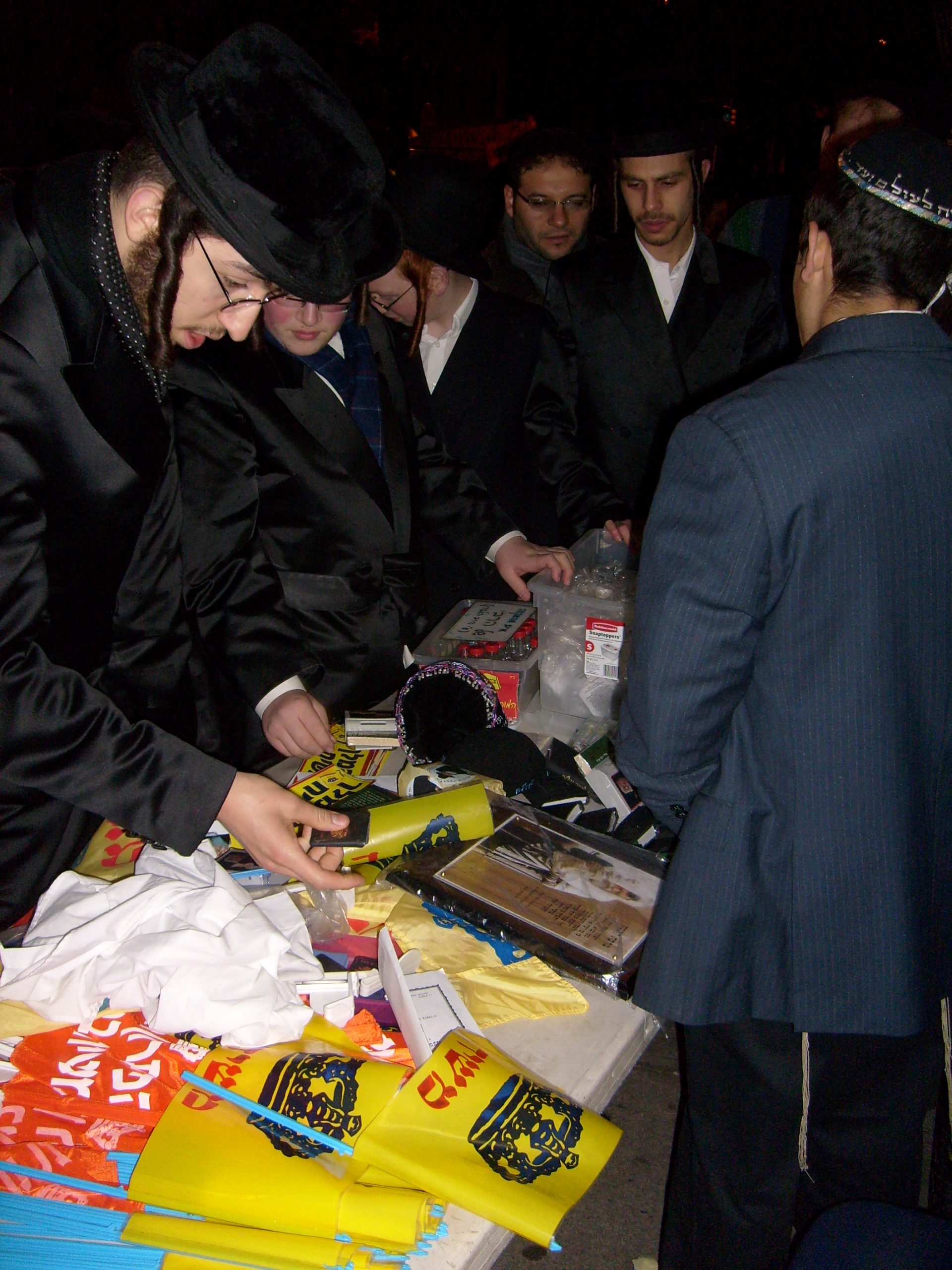 I noticed a thorough effort being to keep the men and women separate. There was an extensive mechitza system set up that reminded me of a corn maze- but didn’t actually work to keep me out- because the pizza store to my delight was smack in the middle the women’s section. So many chabad cutties so little time. The pizza was quite good- it better have been because the line was out the door . I played Jewish geography with a fellow snag on line and we talked of old Brooklyn and how it used to be before the Yoilies and oreos moved in. 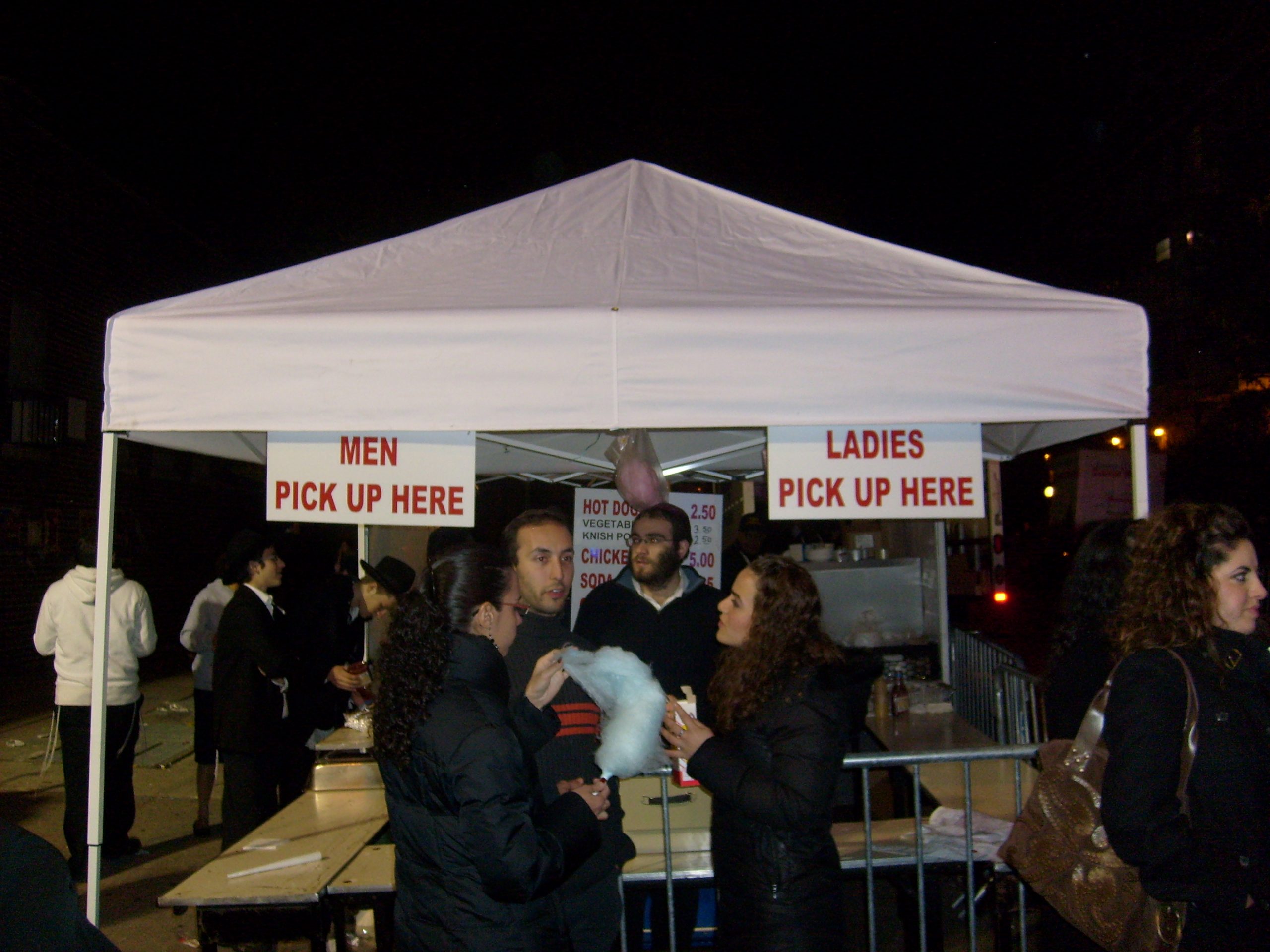 Then Jacob Da Jew showed up and we went wandering around the side streets and BT yeshivas in search of a fabrengin with booze. All we found were speeches in Hebrew with every other word being moshiach. Then we wound up at 770 and found the biggest pushka in the world- you dont believe me huh? It kind of had that slot machine feel- so many slots and so little money- then you realize that the holes probably all lead to the same place. 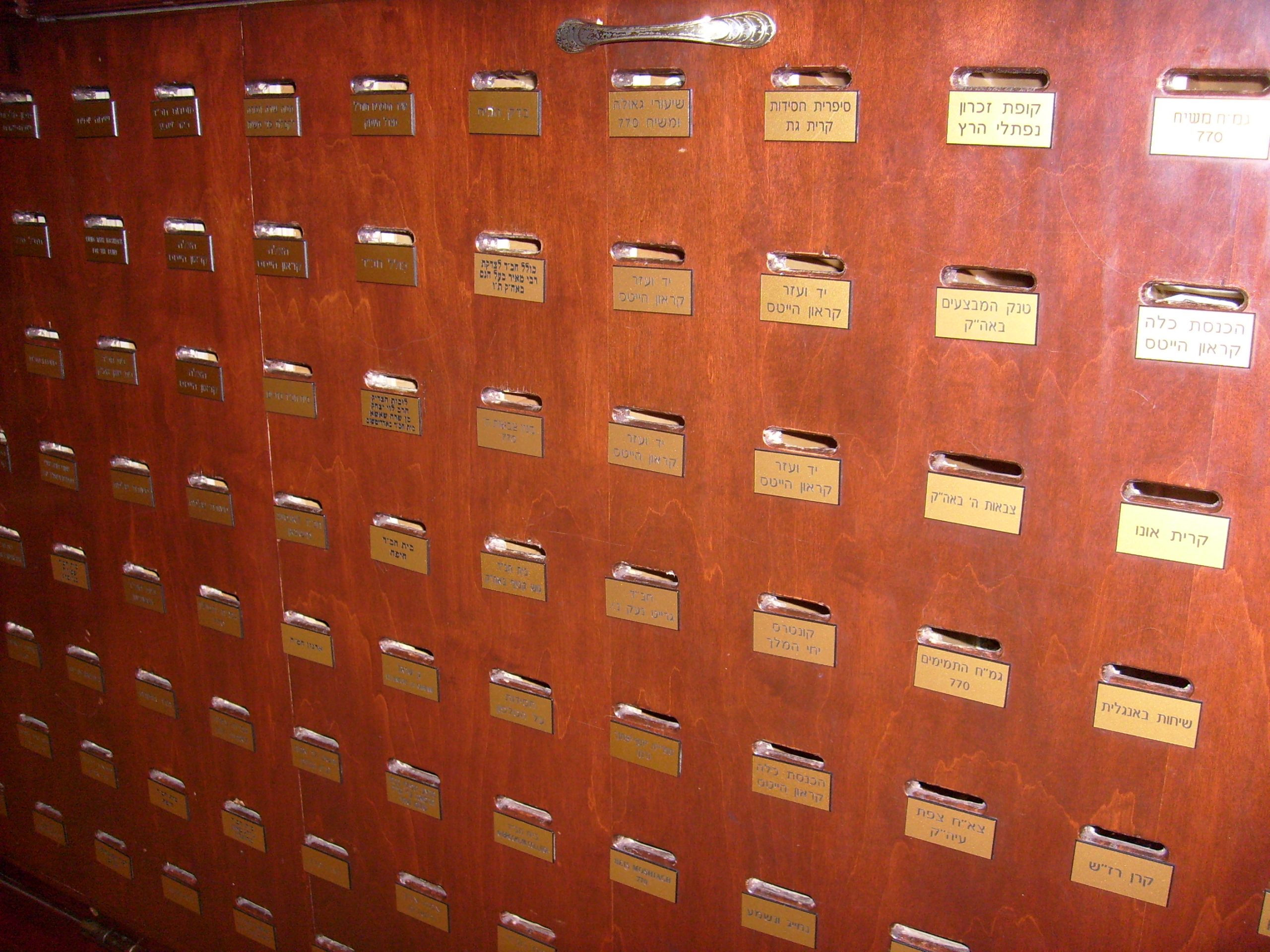 We also met the world famous Charlie Buttons in 770 who told us that it was built by the messiah himself and proceeded to give us a rant for my camera that ranged from moshiach to why Obama may be good or bad for the Jews. 770 is always a trip.

Me and Charlie Buttons 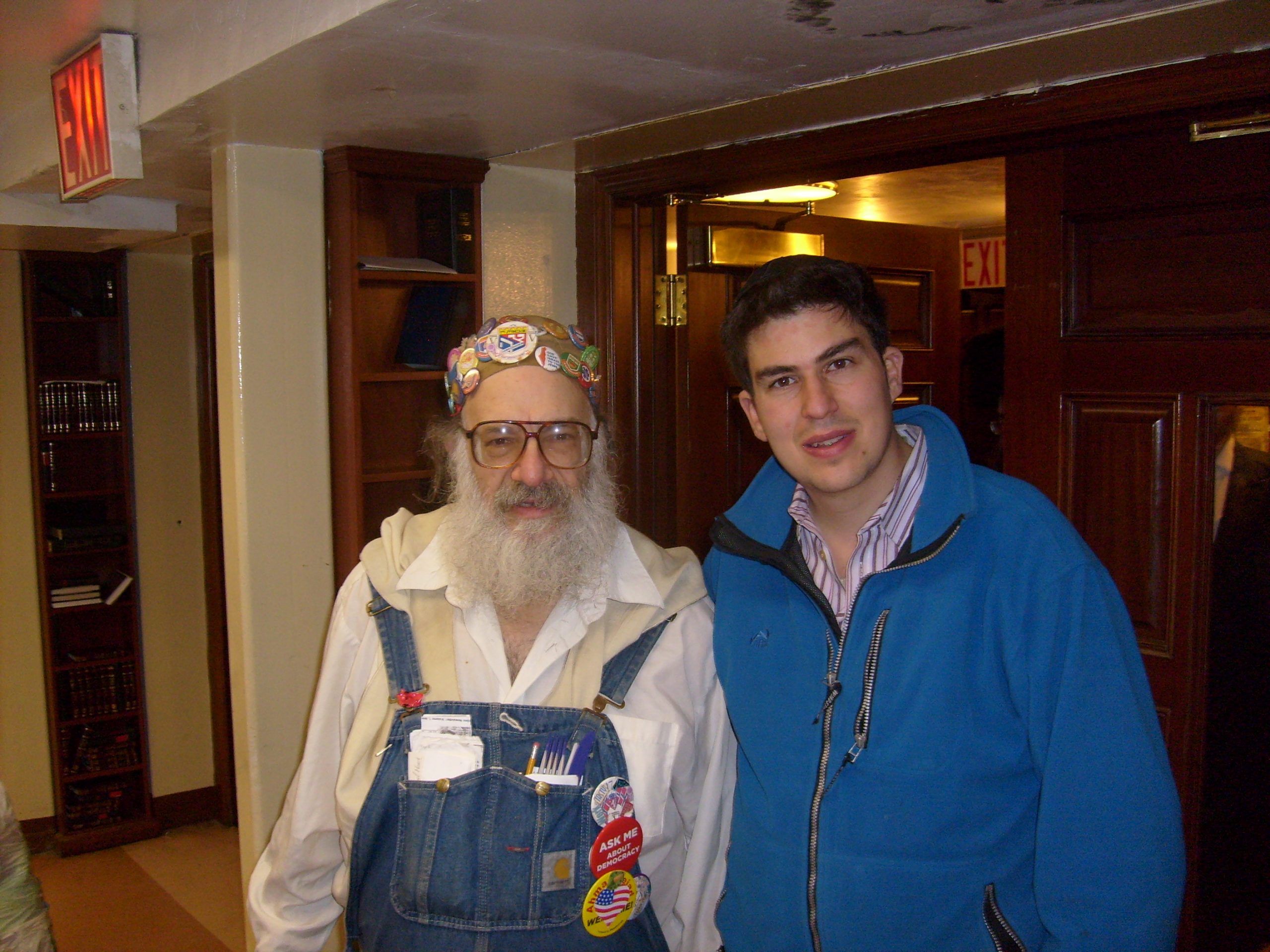 Then it was back to the scene, Jacob Da Jew was out and I was left alone amidst a scene that reminded me of the mid 90s in Woodbourne or Ave J. It was so funny, everyone was 10 years younger then me, smoking up a storm- guys giving each other fist bumps and bro hugs. Girls screeching upon seeing their friends. No idea if its a chabad thing or not- but all of the girls wear the same exact boots, they appear to be suede, furry on the inside and brown- they also look very comfortable- although I found them hideous in the looks department.

It was a classic off the derech, yeshiva rebel, kids at risk- we need Rabbi Horowitz to write an article about it type of scene. Everyone was smoking, cursing and talking about fighting with someone else. This was never my scene- as I used to in Israel- I stood at a corner and merely observed what was going on wiuth the occasional person coming up to me and saying “yo your that dude on you tube” or “I love your blog” which is always flattering but I was enjoying my time alone, alone and just merely observing the swarms of kids shifting and swarming around whatever was the next interesting incident.

They had these spray cans for sale, and kids were spraying each other and of course a fight broke out. Fights in these situations never escalate beyond people holding their friends back and yelling at each other that they are going to kick the crap out of them. Then the people involved in the fight lunge at each other and some sort of authority whether it be a huge chossid, shomrim guy or police officer stops the fight and everyone disperses before anything actually happens.

I found the entire scene interesting, but what was even more interesting was the demographic makeup of the crowd. You had the “scene” with all these off the derech types mixing with some modern chabad kids and so on. Then you had a whole bunch of non-chabad chassidim standing around on the other end of the intersection- which was at Kingston and Crown streets. These non-chabad chassidim lets call them satmars- even though I remember hearing some conversation about puppa- I kind of view chassidim like I view Asians, they are all the same- even though there are hundreds of sects. To me its Satmar or Chabad- with a few of the more popular ones mixed in. Ethnocentrism you may call it. 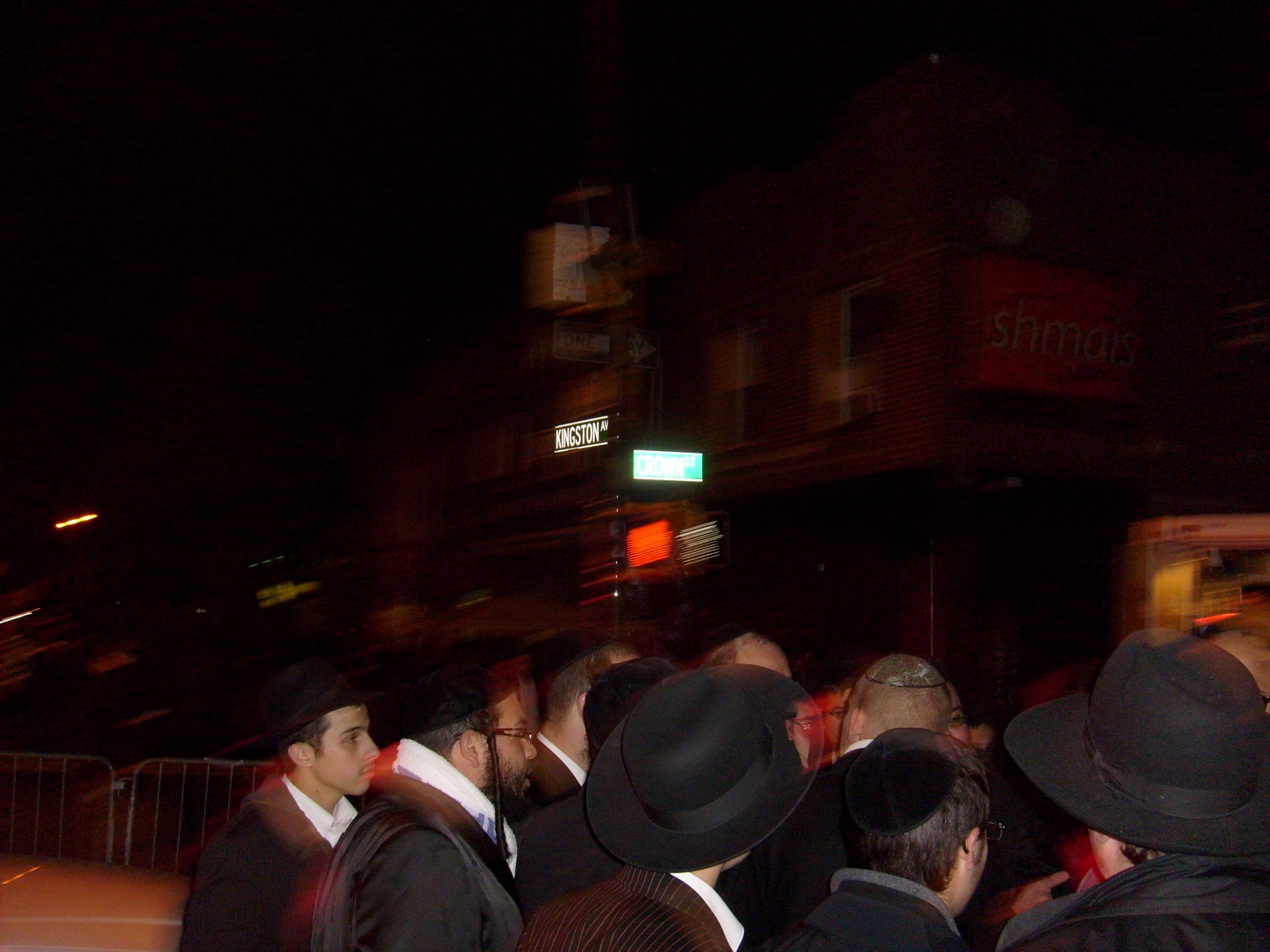 So you have all these chassidim, and then in the middle you have this mix of yeshivish misnagdishe types, chabadnicks and modern orthodox. It was a big mix with the male to female ratio being about 10 to 1 similar to that of the Yukon or Labrador. Shidduch crisis my ass! 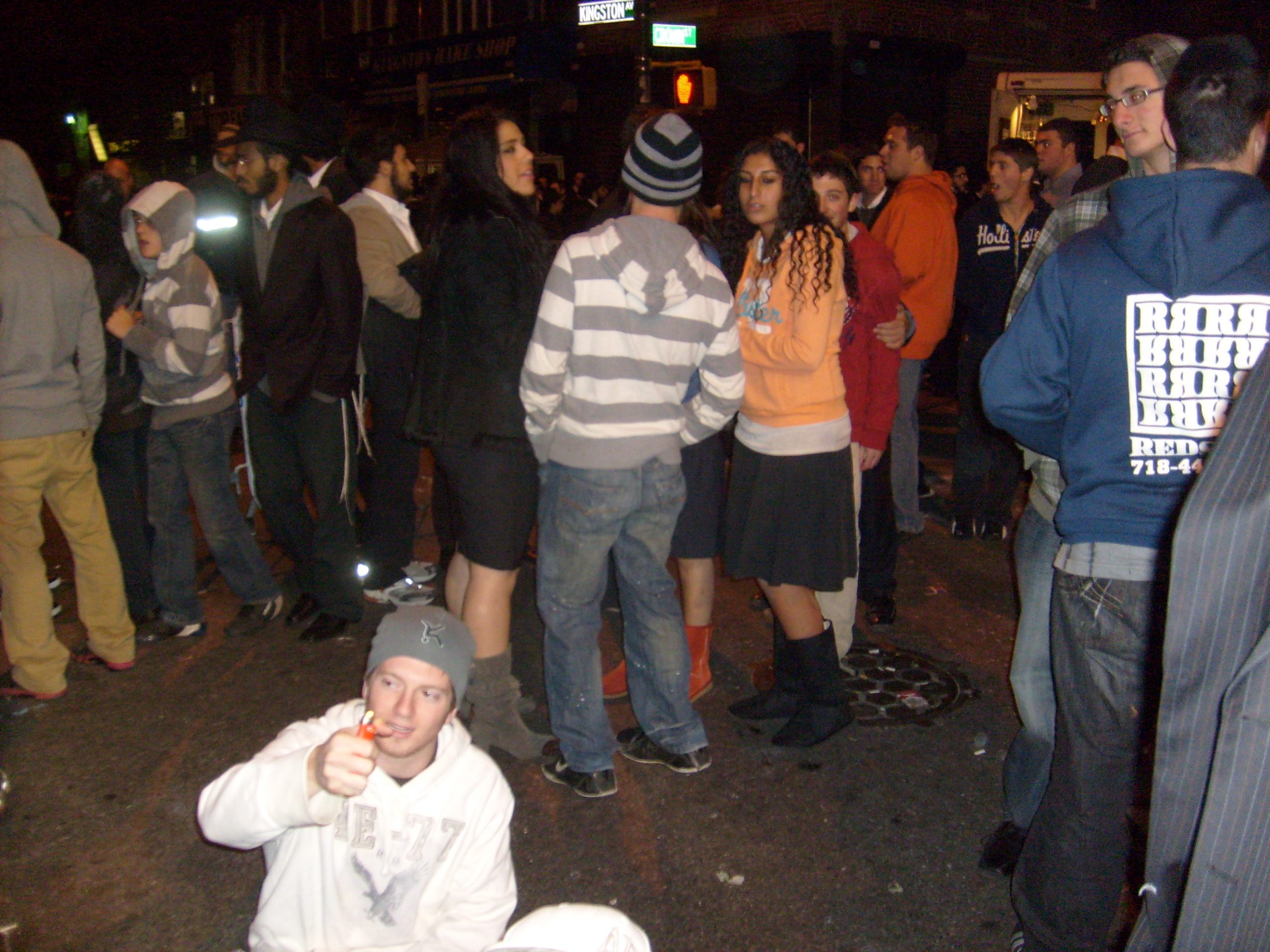 I wasn’t really sure what to make of all this besides for the fact that I love people watching and it was satisfying that need. Even better was that I had my trusty digital camera and was snapping away and taking footage of the scene. But the inevitable fights broke out, which was so unfortunate- because I just hate to see anyone fighting, especially Jews- but as said before the fight never escalated beyond “suck this” or “kiss that” and thank God for that. But let me tell you there was this one shaved head dude getting into it with these big mean looking Satmar guys and everyone was telling them to go back to their neighborhoods and all these Tuna Beigels were just hanging around and I was kind of wondering what on earth all these married chassidim were doing out at 4am away from their families- hanging around a bunch of 16 year olds.

Then the infamous Leah Kleim showed up and things got interesting. Leah Kleim is a chabad women who is involved in a whole bunch of stuff including blogging about topics of a very sexual nature combined with chabad conspiracy and things of the sort. Lets just say that when she showed up I was shocked to see full in garb chassidim coming up to her and saying “oh hey your leah right” weird I know. Anyway- some little chabad kid in this pimp kapota started up with her and a shouting match ensued. Most of which was caught on tape- but will not be put online. Then she started filming all these people who were encircling her all the while creaming at her to go to hell and other unmentionables- I do wonder if this sort of thing only takes place during the chabad simchas bais hashoeva- or is this a constant thing- all this fighting and negativity.

Leah Kleim is the one with red scarf on her head- the guy she is filming is screaming at her. Notice the cop in the back round with a big smile on his face, 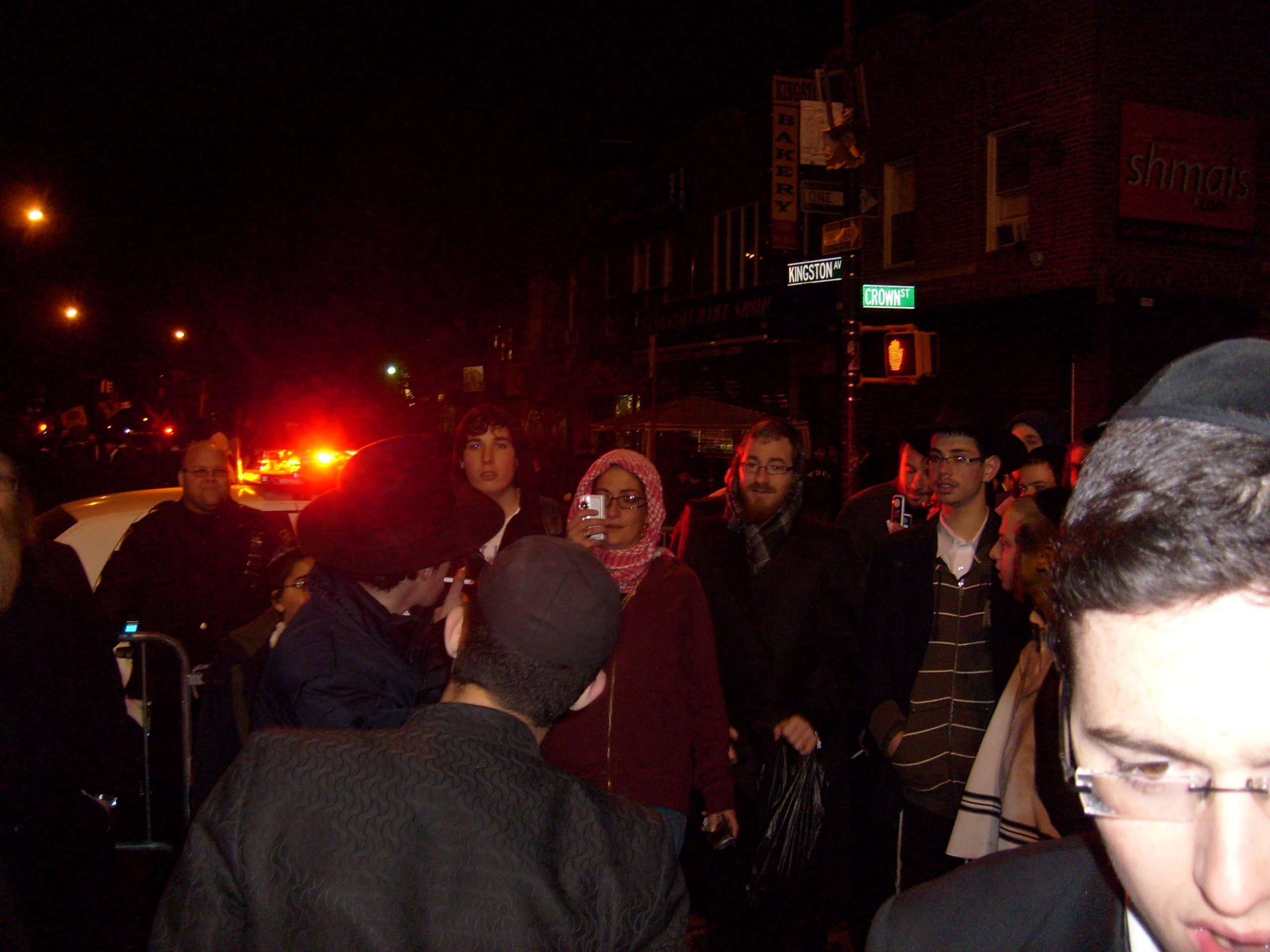