Welcome to the world of Clandestine Advertising!!! 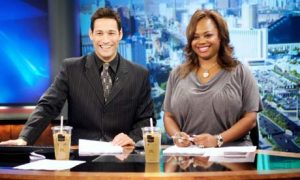 Most educated and non educated people realize that the news is mostly opinions shrouded in something that sounds like fact. But we all see past it, we know that if you are Republican you watch Fox News and Democrat you watch CNN, everyone in between watches the nightly news and reminisces about the days when news was fair and balanced, sure, when was that. So we know news is opinion and merely placed on TV to sell advertising, but what happens when you mix product placement with the news? In my view all hell breaks loose.

This is what McDonalds has already started and is likely to continue to take over out already factless news sources. In Las Vegas McDonalds is paying newscasters to place cups of iced coffee on their tables during the news. I am appalled by this as I think you should be, even though they don’t actually drink the coffee, so now were wasting eh.

What’s next? Are we going to see Larry King slamming into a Slim Jim during his show. Hannity and Colmes eating snickers bars during their bickering? Maybe even publicly funded television will start getting in on it, and the news people will start wearing Old Navy or something. I just think that news is already a shaky subject but to put large corporations which already deal shady with the government, into such a volatile position with the “news” or propaganda if you would call it- is walking on this ice.

Think about this for a second, what would happen if advertisers started entering religious events.

Can you imagine the guy who makes havdalah on Saturday night saying- this havdalah was sponsored by Baron Herzog, remember to drink responsibly and walk home from shul. Or maybe the peroches on the torah will have a big Abercrombie and Fitch logo. What if the back of benches in shul all had advertisements on it? We could even have banners hanging from the ceiling of shuls with different advertisers on them.

Of course it would be controlled, the frummer the shuls the less likely they are to have secular advertisements, paving the way for companies like Leibers and Ungers to take over yeshvish shuls and venues, but in modern shuls, Coke and Kraft could sponsor the laining and birchas kohanim doings, it could be some great dough for all these fledgling Jewish organizations if you think about it.

← Just put bentching on page one of bentchers
Do you think frum women hyphenating their names is a problem? →

25 comments for “Product placement advertising comes to the news?”