To be or not to be….shomer negiah, that is the question: 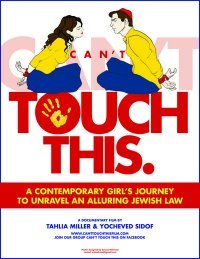 Shomer Negiah is one of the most talked about things amongst folks in the frum community prior to marriage. After marriage it switches to diaper expenses, mortgages and getting new cabinets. So it was no surprise when I was contacted by a young women from Brooklyn (Crown Heights) who was in the middle of making a documentary on the subject. I was surprised that the whole point of the documentary was to follow several people through their relationships, struggles and eventually to display the film to high school age kids to educate them in the ways of sex and keeping negia.

They also wanted people to talk about their experiences and that was partially what I did. The folks making the film had found my video-rant on You Tube about the subject and loved it. Very flattering of course and when I showed them my shomer negiah post breaking down all the categories in written form they also loved it. That post by the way remains the most read and commented on post by far with almost 200 comments.

So I went on down to Brooklyn and met these two women for some filming. They wanted to interview me and then had me rant, reminding me with pointed questions about certain areas of relationships and keeping negiah that they wished me to talk about. The one thing I thought they would censor me on- SCT- shomer cock tease- was in fact one of the things they wished I would embellish on. Fine with me, put in with people asking questions and my best material just flows, and it flowed for close to 4 hours. Here is a link to “Cant Touch This” their facebook club. The film was recent previewed at the Jewlicious Film Festival- here is a great article on the Jew Spot Blog

For many of you keeping negia may not even be a question your mind. Its in the shulchan aruch, its halacha, I’m a torah keeping God fearing/loving Jew- that’s great if your like that. But for the rest of us, I would say a majority of Modern Orthodox/Grew up frum- but didn’t marry at 23- it is probably a different story.

I didn’t even grow up in a situation where I couldn’t have girlfriends or even have them sleepover, I just went to a yeshiva high school, so until I was 19 I never really “got any” as they say in Borough Park. The Rabbis in my school always liked to say that on our weddings nights we would regret all we had done, and they had a point, the problem is that things of the sort go unheeded in an instant gratification society.

Keeping Shomer Negia is one of those things that while everything else we do is scrutinized based on halacha, usually just goes into the back of our minds, the yetzer harah doesn’t even have to sit on our shoulders, because we would touch that girl/guy regardless.

Even though I claim negiah, and try to keep it, I can tell you based on experiences of mine and most anyone I know. Most religious Jews are SUO (shomer until opportunity) or SUR (shomer until relationship) with the latter being more common amongst people like myself who refrain from handshakes, hugging and sitting next to women.

Another interesting notion I have struggled with is the pure concept of this. Does keeping negiah strengthen of weaken a relationship?

On the one hand keeping negiah allows the couple to discuss their issues rather then jump in the sack. They can keep things less complex and control any unjustified feelings which may creep up because touch accelerates things.

But then again, keeping negiah means that during the relationship certain false feelings of love may creep in for want of touching the person. So much so, that some people are driven towards marriage because they feel so strongly for the person and want to touch them. Others are driven to marriage for legal ways of having sex.

So this film addresses all of these issues and the folks making it are in the process of applying for grants and trying to finish up the film. With that said they are looking for folks to interview. They specifically asked me if I could find two very good looking people a guy and a girl who have always kept negiah to talk about their experiences on camera.

They also want to film yours truly on a real shidduch date to educate the non-religious and non-Jewish public on what happens on a date with no touching. No hug at the end, no asking to come upstairs, no nice to meet you handshakes. Just plain old hotel lobbies.

← Ways to look over the mechitza w/o getting caught
Happy Purim!!! →