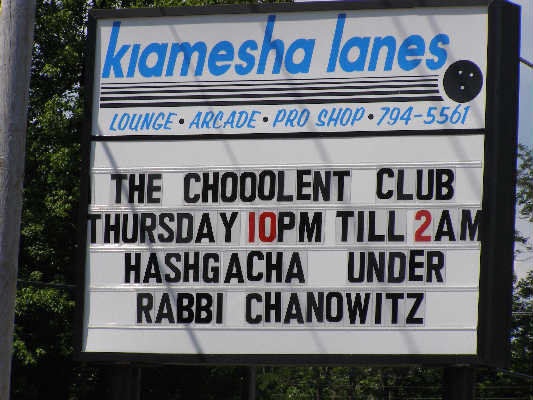 So I have been working in the Catskills quite a bit and figured it was about time for someone to write an all encompassing restaurant review. Please note that this review is only of restaurants and bakeries that I eat at regularly.

Dougies:
You know you are a regular when the boss offers to treat you to dinner. Its not that I love Dougies so much, I do remember when it was all the rage in the late 90s, when the only one was located on the upper west side. Dougies in Woodbourne has become the restaurant of choice for frummy rebels, hot underage girls who come to check out the Niveh guys who work there and ex-chasidic guys who bring their girl friends. Its clientele is more diverse then the other restaurants around and the deals are pretty good.

For under 20 bucks you can fill your pie hole and feel satiated. My personal favorite is the sliced steak sandwich for $16.95 which comes in a 6 inch sub roll with fried onions. The steak they use happens to be very good, I am not comparing it to Prime Grill mind you, but for the price it works for me. I also can be seen eating the most unhealthiest of treats, the blooming onion, I usually order this with some of Dougies? buffalo wings which have declined in taste over the years but still hit the spot.

The service is great, while the tables are cleaned frequently, although during a huge chassidish rush- it looks more like one of their bungalow colonies than an eating establishment.

If you want to stare at hot chicks, ex-druggies serving your food and listen to yeshiva guys hocking, then Dougies is your place. It is also the best place to chop a free meal, because everyone leaves over their fries and half eaten meals on the table. The best part of it is- that no one looks twice if you grab a half eaten meal off of a table, how I love being ghetto.

Country Caf?:
Hands down the best restaurant in the Catskills, also the most expensive. If you have the money and are in the mood of some great salads, fish dishes and sushi I definitely recommend the Country Caf? in South Fallsburg. It is clean and the servers are friendly as long as you treat them nice. I have been speaking to some of the waiters there and they say that many of the young newlywed women who come in during the week all dressed up and hot- treat the servers lie slaves ordering them around constantly. If you treat them like slaves they will treat you the same, they may make you wait for your food for lengthy periods of time or shake up your can of soda so that it will explode on you. Don?t mess with the Kesher boys who work there, or the hot blonde polish chicks behind the counter.

Besides for the abnormal amounts of Bungalow Bitches as I like to call them, the clientele is of a different breed then the rest of the mountains. The tables, bathrooms, and floor are all clean and you can eat with confidence that you will not get a stomach virus. The price is actually the only thing that is wrong with the restaurant, it is very high priced for the d?cor and food styles.

A Cesar Salad is $10.95 and all it contains is bagged lettuce, croutons, and dressing- a rip off indeed. The eggplant parm however is the best deal in the place, you get a huge portion of eggplant on top a plate full of pasta for $16.95. I also like the Caprese Salad-, which is not such a great deal, but a truly good salad. It contains all the normal salad stuff with marinated mozzarella; sun dried tomatoes and the best balsamic vinaigrette around. Their sushi is also quite good, if you can afford it I would recommend the Shogun or Dragon roll, they say that presentation is everything and the sushi dudes don?t let you down. The French Onion soup is decent and the mozzarella sticks are great but too pricey. The pizza is good but not very big, in the past the fish meals were also very good as well.

Country Caf? is definitely home to the hottest married girls hands down, in fact they are constantly hitting on the waiters asking them to toss their salads and if they can have some of their cream on their pasta. Another bad thing about country caf? is the toilet in the men?s bathroom, it is simply too high to allow any dumping comfort, the toilet paper is also set far back from it and forces you to get up to reach it.

Shawarma King:
The best deals in the Catskills, the Shawarma King located in Monticello is the place to go if you enjoy greasy foods, indigestion, and dirty Chassidim sticking their hands into the salad bar. If cleanliness is what you seek when choosing a place to eat, do not come to this place. If you enjoy stuffing your face for under 10 bucks and watching Chassidim hock with the dude behind the counter for a better piece of their signature deep dish kugel then this is your place.

For $8.99 you can get a pita filled with homemade humus, shawarma and fried onions, with an over flowing plate of salad bar, fried eggplant, peppers, and all the fixins. For some reason shawarma and Chinese food have the same characteristics. They feel so good until you are halfway through the meal and full, you have so much on your plate and just keep going. Your bathroom duties after Chinese or shawarma are always the same in a nightmarish sense.

If you want a quiet meal go to Country Caf? or a pizza store, do not come here. On Thursday nights do not come near because it?s a zoo, I tried once and was tackled by large chassidish women vying for the last quarter pound container of kasha varnishkas.

Woodridge Pizza in has the best veggie pizzas. I especially like their roasted pepper slices, which are crunchy on the bottom with a very thin layer of dough cheese and sauce, which is interesting since their other slices are much thicker. Cleanest bathrooms and best seating arrangement of any restaurant by far.

Fallsburg Pizza which is located at the 4 corners intersection and owned by the same guy who owns Woodridge Pizza is home to the most put together pizza, your cheese will not fall off the slice even if it were placed into a wind tunnel making it very good for car eating. The indoor area is very small and claustrophobic though they also have the only outdoor seating and they are located within walking distance to good viewing of the falls and even better make out spots in that?s your thing.

Fialkoffs in Monticello is home to the oiliest pizza, if you look over the counter you can see the puddles of oil forming in between the bubbles of cheese which have mysteriously formed in the ovens rendering the pizzas chometz. Is this why when you order a couple of slices to go they fold it up put it in the bag and the bag eventually soaks up all the oil making it ready to eat. Well they have very good tasting pizza, but the falafel and other stuff is so so.

The Kosher Inn in Woodbourne is home to girls camp councilors who need their ice cream fix. The pizza is super sweet and great tasting and they have the most variety of non-pizza type stuff like calzones, cheese pretzels and borekas. It is usually very crowded, but cutting the line is always very easy because for some reason their clientele have no clue how to order anything.

Woodbourne Pizza which used to be the biggest hangout in Woodbourne has changed owners so many times I cannot count. It looks like a lunch room from the 1970s and have been awarded the nastiest bathrooms trophy in the mountains many times. Well the pizza is great as always if you like the thick and doughy kind with more cheese and less sauce, they also do not have good veggie offerings or non-pizza offerings.

Bakeries:
The cherry cinnamon Danish at Fallsburg Bakery is out of this world, as is watching people pull fast u-turns nearly missing the million chassid marches that are usually going on by the shoulder of route 42, in order to get to the bakery- which it always seems is on the other side of the road. Luckily the shoulder can accommodate 15 seat vans full of screaming children and large charedi ladies toting wal mart bags and waiting for a ride to the next eatery. I would also recommend the bagels and kokosh cake- especially on Thursday nights and Fridays when the bakery is a zoo- but the food is hot and fresh.

Fialkoffs bakery which apparently has no relation to the pizza store bearing its name and located directly across the street has Ruggaluch?s, multitudes of them, screaming for a chance to ride home in a oily paper bag slumping on the passenger seat of your car as you down these delicious morsels of oily dough- that come in a wide variety of flavors. I personally like the vanilla, they are even better after they have sat on your dashboard for a few hours in the sun. I also love the jelly donuts here, except the amount of jelly is not uniform, causing either too much or too little to be inserted into the hole.