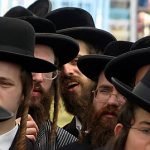 I know what I’m about to say is going to piss off some of you nutty left winged morons, but it needs to be said. I’m sick of people trashing the true believers and authentic followers of Judaism for the real and true interpretation of the Torah and Halacha. I have seen a disturbing trend in which people to the left of the black hat seem to think they understand the Torah better than those who actually study it day and night and keep to the true interpretation and mesorah from Sinai.

Just like the few Mormon fundamentalists who distort what Joseph Smith had in mind when founding the religion, there a few Chassidim who distort the religion and create a lot of headaches for everyone else. But for everyone that wants to try and find some sort of politically correct answer to the harsh reality of a true Torah observant lifestyle is headed in the same direction as the Reform, Conservative, Modern Orthodox and Chabad Jewish movements. These movements are false in the eyes of real Jews and you don’t need to venture far into authentic Judaism to see why. These movements have distorted Torah Judaism to make it user friendly and invite secular ideals into their lives, but why keep kosher, shabbos or any other halacha if you’re not going to keep a true separation between us and them. Do not be fooled by the black hats of chabad and the large Israeli flags of the modern orthodox, they are just like the Reform Jews – only a little better at marketing their falsehoods and seemingly authentic Judaism. The only thing authentic about these people is they are claiming to be Orthodox yet accepting of non-religious Jews. In many cases one is supposed to kill his idol worshiping Jewish bretheren no matter how bad it may look. Baruch Hashem that someone had the guts to speak the emes in sefer Toras Hamelech.

Now you even have some authentic Jews being swayed by the anti-Jewish left wing Jewish controlled media which paints all true Jews as barbaric and ancient, the truth is, that in order to remain Torah observant one needs to be ancient. The Torah itself is ancient, from a “barbaric time” yet we have survived and continue to. What will be of the non-authentic Jews in 50 years. Intermarried and running around naked I suppose.

So many halachos have been deemed as non-politically correct, yet those very same people which espouse the changing of halacha are themselves picking and choosing their own things in the shulchan aruch to keep. To say that something gives you inspiration is absolute apikorsus. To say such a thing proves that your Judaism is based on your own needs and not on Hashems. To say something which Hashem commands us to do is wrong or backward or out of date is absolutely disgusting, to say you did something commanded of you for any other reason than that God said so – is leading us astray.