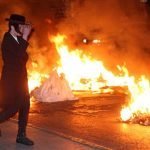 I told myself that I wasn’t going to be commenting on news this week, but the craziness going on in Beit Shemesh deserves some attention, I have been told that it is not the majority of Charedim who agree with the violence being perpetrated in the name of religion by so called “religious Jews”. I have been told that it’s a very small minority, yet I have not been sent any kol koreh’s signed by our so called Gedolim condemning such distortions of the Torah. I have seen Kol Koreh’s signed by the cream of the crop of gedolim banning concerts, the internet and lettuce – yet when school aged children are attacked for no good reason – I fail to see any outrage on behalf of our Charedi leaders.

If 99% of the Charedi community is against such acts of violence and acknowledges that this is a distortion of Torah values one may think that there would be protests, rallies or some sort of public action taken to make sure that we orthodox Jews are not bunched into the supposedly small minority of people who are doing this. Is it similar in the way that liberal apologetic’s like to tell us that the a majority of Arabs and Muslims really like the Jews and want to live in peace – you never hear those leaders confirming these thoughts.

It’s not that I’ve had a terrible amount of respect for the gedolim anyway, but it seems their silence is going to undermine their leadership andit’s not only the folks in Israel who are guilty, the American Charedim aren’t saying anything either. You don’t see protests in Williamsburg or Boro Park and this is because I think most ultra orthodox secretly agree with the underlying roots of the violence. Sure they don’t think you should spit on little girls, but maybe they agree with the war against the chilonim and modernishe ways of life and sometimes you have to go to extremes in the name of Torah.

Find out about charedim on 4torah.com

← How to solve all the Jewish crises
Chosson Class Fail →

62 comments for “Occupy Beit Shemesh: Where are the 99% of Charedim who don’t support this?”