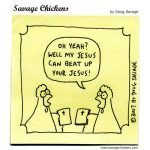 Religion is one of those things that can tear people apart or bring them closer, it’s a wild animal that knows some taming, but much of the tame it runs around and we really don’t know what to do with it. Many of this sites readers can attest to religion doing something harmful to their families, whether it be due to over bearing parents, off derech siblings, children who decide to frum out in Israel and not eat in their parents homes – there are thousands of ways in which families can become tension riddled units due to religion.

I myself have wondered about this much, my brother and I have always stayed on the path and although we don’t all agree on exact ways to practice, we have pretty much the same idea – but I have looked at and watched families be torn apart because of differences in the way they see life and Judaism. I have watched parents disown children because they became religious or left religion. I have seen marriages broken due to religious differences (the trend seems to be the men realize their wives are too religiously overbearing for them – at least ) so you get the picture – religion can hurt just as much as it can heal.

Until now I have never heard of an organization that was trying to bring healing to both sides of the picture. There are dozens of frum organizations which will help scheme with you on how to get your child back on the derech, they must have very good marketing – because once you go off it’s quite hard to come back and there are other organizations like Footsteps which help people who have gone off the derech, get an education, find a job and find some sense of community.

Many Chassidim that go off the derech cannot find a job due to lack of a basic education and since many of their families disown them – it is a huge issue which is being dealt with by Footsteps. There is a very large, active and growing community of Ex-Chassidim, but I wonder if there are any groups in the Chassidish world that have tried to fix it from the perspective that these are children of parents and parents of children and you cannot just disown your own kin – can you, but I know the community well enough to know this would end in the death or excommunication of the founder so it probably will never happen.

Now I like the idea of starting an organization – Welcome Home -that deals with this, my friend Jonathan Dickens decided it was high time, after seeing friends who chose to be religious create tensions with their families. I am not sure that he wants to deal with both sides, because both sides need dealing with and judging by the content and design of the site (no offense Jon) it has a long way to go (IE it looks terrible man), but the thought is what counts – so when he asked me to link to it I decided to write this whole post to see if there are any other groups, people or organizations out there that deal with religious differences in the orthodox Jewish world.He would like for people to share their stories on the site, though it wasn’t clear how to do that.

Unfortunately, it seems that most groups agendas are either to keep people off the derech, or bring people back to the derech and that objectivity doesn’t seem to be something to play with when religion enters the mix. Although, when your beliefs are so strong, one may ask how it’s possible to deal with an issue you feel so strongly about and that I cannot really answer.

50 comments for “Have religious differences torn your family apart?”