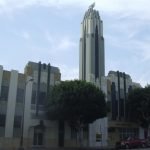 At some point I figured I should standardize the whole shul review thing. I could have a little form, which I fill out as to how well said shul performed according to me. If I ever came up with such a form I could have a 1-5 rating and then explain briefly why they got that score, but alas, I don;t have time for such things, but if anyone would like to come up with a shul ratings form I could use – email it to me in a word document. Of course, I decided this all while sitting in the very comfy chairs at B’nai David this past shabbos morning, because the shul exceeded my expectations and since no one recognized me I felt I could be totally honest with what I experienced there.

B’nai David was one of three shuls I wanted to visit on shabbos morning, the others were Young Israel of Century City and Beth Jacob (which I visited many years ago on a road trip before I started blogging) I had heard that YICC was where I was likely to meet singles and younger folks, that Beth Jacob was where the wealthy davened and that B’nai David was super left wing and full of hot chanies (for the record, hot chanies are never left wing because in order to get the hot chanie status you need to wear a sheitle)

I walked in to B’nai David and before we even entered the sanctuary someone wished us good shabbos. The Sanctuary at B’nai David is huge and the ceiling must be at least 50 feet high. We found the siddurs, they have koren sacks and artscroll, but it seems the koren sacks are in low supply or high demand. For a left wing shul the mechitza was quite high, it also featured spikes on top of it to prevent any mid-davening ruckus, for instance if you tried to pass a baby over the mechitza and the baby fell – it would be impaled by the wooden spiked design of the mechitza. My host then explained to me that Rav Moshe’s teshuva on mechitzas was that they should be high enough that you couldn’t pass things over it. I guess, since Jewish men are quite short these days, short mechitzas have become acceptable. This mechitza was of moderate height, you couldn’t see a darned thing when sitting down, but when standing up, you had a fighting chance.

I tried to find anything that could have made several people tell me that B’nai David is really liberal. The ladies did get the Torah when they took out the Torah and when they put it away, big deal, I’ve been in plenty of shuls both left and moderate and have seen that done. My host (possibly one of my most learned fans, although one of the worlds foremost authorities on gittin is also a fan) wished to dispel the myth that women cannot hold Torahs and said that the frummies don’t like it, but there is no halacha against it, which I knew already from doing my own research and question asking.

When I walked into shul I recognized this guy from my Rochester days and he asked me if I wanted an aliyah, so I got chamishi, by contrast, I have been living in the Bay Area for over a year and the shul in Palo Alto called me up to the Torah once – even though I’ve been there dozens of times.

I know I’m a little obsessed with shul bathrooms, but I think a lot of valuable shabbos time is spent getting rid of our toxins so why not? When I flushed the urinal at B’nai David I thought it may have triggered a small earthquake, it rumbled and sucked all of its contents down real quick. It reminded me of the toilets in Washington Heights which have the best pressure of anywhere I’ve been. The bathroom also provides a second exit down to the social hall for easy access to kiddush.

The laining and shachris was very quick, but the shul lost a heck of a lot of time during the prayers for Israel and America, if modern orthodox shuls abolished this mess they would end much earlier. Did I mentioned the seats were comfy? They didn’t have enough leg room though and I couldn’t find the shul library so I’ve no idea if they had one, their bulletin board wasn’t too great and I doubt the fathers of the shul would foresee that some crazed blogger would ever take them up on their bulletin board or powerful flushing urinals.

When the Rabbi got up to speak and introduce the guest speaker, I realized that the acoustics of the room were terrible. The ceiling was 50 feet high after all. The guest speaker was Dr. Zara a mighty fine speaker who’s a physicist becoming a Rabbi.

In the midst of all this davening and shul I got a good look at the crowd and it seemed to be a middle aged to older crowd, most everybody appeared to be between the ages of 40 and 60, knitted yarmulkes dominated and I couldn’t see any black hats, though there was one guy I saw at kiddush who had daimond earings and a gangsta looking blue hat and my host wears a gray hat. Attire was mixed between suits and no suits. The ladies mostly wore hats and I think I spotted one sheitle, again the mechitza didn’t provide a view when we were sitting, so my options were limited.

I was kind of hoping it would be more liberal, the women didn’t give any speeches, open up the ahron and no girls got up to say adon olam or anything, so my assumption is that a bunch of people who don’t daven there or are very right wing have mistaked this shul as liberal while I would call it more centrist modern orthodoxy.

The kiddush was hot and I didn’t eat anything besides for cholent, the fact they didn’t have any biodegradable cutlery or plates was a bit of a shock to m Nor-Cal liberalness, but the cholent was damned good so I let it slide. I got a couple of meal invites and the guy who announced at shul that anyone in the need of a meal or who has a place at their meal should find him at kiddush, came up to me. I like this and think every shul should do it, none of the shuls in the Bay Area besides for Berkeley does this and I am in a constant wonderment how I can go to a shul and they not have a system of ensuring every guest gets a shabbos meal.

Kudos to B’nai David for being an extremely warm and welcoming shul, having good toilets and great cholent.