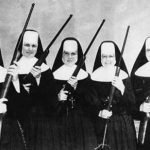 sIt is only a recent phenomina that women want to learn torah, for many years they were complacent in the kitchen, running their homes, churning the butter, dying in childbirth and tending to the chickens, all of a sudden they were given the right to vote and they became all feisty, demanding things like the ability to leave the kitchen, support their husband in a low paying postdoctoral program that never paid a living wage and actually learn torah. Blasphemy, the rabbis scoffed and suddenly they were all up in arms about women wanting to know the meaning of life – having their husbands and rebes tell them wasn’t enough. Luckily this trend hasn’t reached the heimishe velt yet, it has inflicted its wounds on modern orthodoxy and slowly it will creep into frumkeit and then what will they do.

According to most frum rabbis, the kind who wear hats, say Rabbi Akiva Eger with one syllable and speak in an almost incrompehensible mix of yiddish, yeshivish Hebrew and yinglish. Those Rabbis have warned us for many years that women wanting to learn was assur, they forbade it, I wondered why – considering that they trusted unlearned women to be their own personal mashgichim running the kitchen as they discussed complex issues like how long the great sages penises really were. It’s hard work discussing legal issues that will never apply to us all day, for a pittance and coming home to a great home cooked meal us great – but what if the cat jumped in the cholent while you were gone? Cats always jumped in the cholent back in the shtetl days, with no phones the women were bound to paskin on their own – this is not freely admitted in yeshivish circles, but the ladies weren’t always reading tehillim if you know what I mean.

Fast forward many years and you have this seminary thing. If you don’t go to seminary you’re screwed, you will never find a shidduch, but at the same time they can;t learn torah because it’s assur. It;s assur because women aren’t commanded of it and may be doing it for the wrong reasons – I had always thought learning torah was a good thing no matter what and if you do something for the wrong reasons you may come to do it for the right reasons.

So if women can;t learn torah, what exactly are they doing in seminary? Is it one big overpriced sleep away camp in Israel? Are they teaching them how to behave after coming home from the mikvah? Are they teaching them the fine art of deli roll and mango strawberry salad? Maybe they are practicing how to walk tzniusly, or how to properly wash and set a sheitle, or maybe they are just saying tehillim all day?

Women aren’t banned from learning all types of torah, just the stuff that the men learn. So they can learn chumash and navi, the two things which seem to be the most untznius, I mean, Navi is like the craziest blood, sex and warfare thing you can get and the chumash is full of stuff like Rueven and his fathers concumbine, lots daughters, tamar, you know the deal?

For years I have been trying to find someone who is fluent in Girls seminaries in Israel, I have always wanted someone to tell the difference between MMY, Darchei Binah and Michlalah (which is run by my first cousin) The only seminaries I have heard much about was Brovenders (where the girls learn gemara so it’s not frum) then everyone knows about Michlelet Esther (their knickname is molestor Esther because they like getting some action) and then there was joke about how you fit 5 Sharfmans girls in a cab – take the F out of way! There’s no F in way! Michlalah is for the smart girls and I’ve heard BJJ is for the best girls.

Speaking of best girls, for guys it’s pretty obvious what the best means, it means they know how to learn really well, but what does the best girl mean? Does it mean that her parents have money so she can support one of the best guys in kollel for years? Or does it mean they are tznius hot chanies who can be real baleboostahs?

I found this video on You Tube from the shalom bayis class at one of the seminaries in Israel:


I was serious about wanting someone to categorize all the girls seminaries in Israel, if you would like to this please email me.

72 comments for “If women are forbidden to learn what do they do in seminary?”