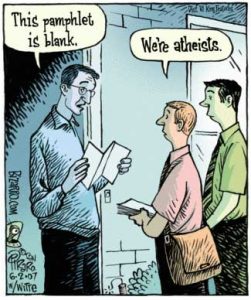 Atheists really seem to have it easy. They probably don’t, but when I look at them from afar it seems to be an easy life. A life of non-believing and depending on their personalities they may be ironically called insane by us religion espousers, but in the end believing in God seems to be tough work – but not so much believing in God as struggling with the entire concept of “what is the meaning of life?” I was asked that by an older friend of mine recently. I couldn’t tell if it was in jest, but I told him that life was about realizations that hit you in the head and made everything else until that point seem idiotic. Like when I realized that worrying about things was the tyranny of the mind. Chabadnicks say it’s the sitra achra and I agree – the other side, the devil, the evil inclination, the yetzer harah – whether or not that may be fictional or not is up for debate – but something in our conscience screwing with us. We worry about things all the time that will happen regardless of worrying or not, so why worry?

So Atheists, what’s the deal? I can’t seem to shake my belief in God. I never actually tried. I don’t think I’m smart enough to be an Atheist. Almost every Atheist I ever met was a scientist of some sort. I have a friend who says that any scientist who believes in God is intellectually irresponsible and I disagree – I don’t see how God cannot be worked into any scenario – I just don’t understand Atheism.

I kind of wish I could be an Atheist sometimes. I wouldn’t have to worry about the afterlife (I don’t really worry about the afterlife now anyway, like most people my age death is not really in my mind much) and my entire life would be devoted helping future generations have a good time here on earth, rather than the constant talk of this so called messiah who will deliver us from our misery, after a 1000 years of nothingness by the way. So apparently, one of the many urban legends surrounding the coming of the messiah (I’m not really sure about the whole thing, I only look forward to it for the fodder it will provide, I’m sure the messiah will be a transgender woman who is modern orthodox and everyone won’t take a hint) is that there will be a big war and the world will be empty of life for 1000 years – so we won’t see the whole thing anyway. Also, how on earth are we going to roll to Israel with all of our luggage anyway? And what about all that stuff the beis din will kill us for, like carrying in an eruv that not everyone accepts — maybe they will have the beis din stonings on pay per view or something with the money going to tzedaka.

Religion ain’t easy, unless you’re ignorant. If you sit and learn all day and never bother to reaffirm your beliefs it seems so easy. “Honey I’m going to Kollel” followed by “Honey did your father pay the rent?” It seems from the outside like an easy life, intellectually at least. Sure, you cannot afford white meat and don’t get to drink brand name soda, but you learn and shteig and believe fully (I think) in what you’re doing. Meanwhile, us underlings cling to this religion we really don’t fully believe in but are afraid of losing the community around it or something of the sort.

I believe so strongly in God, but don’t really know what to do with that belief. Others dive blindly into Judaism, whether it be orthodox, or some other stream, but I’m always unsure. I consider myself orthodox, sure, but am I? I like the term post-orthodox, or post denominational, it makes sense. I don’t have a hashkafa. For instance, I am vehemently against TV and Movies, more from a philosophical than hashkafic bent. I think it’s all a waste of time, but not bittul torah — everything is bittul torah, you know?

To not believe in God takes everything out of the picture, what pains do you have? But then again, when you do have pain, to whom do you daven? Baal? I don’t know if I could live without my daily conversations with the L-rd. He’s the best free psychologist. You can scream at Him, curse at Him, wave your fists at Him or Her or It and it just sits there on its cloud filled lazy boy reading the DSM 4 and wondering about what on earth you’re babbling. It’s really good talking with the Lord, loads of fun, except for the few times that I was heavily involved that when I came across a fellow hiker, they looked at me like I was crazy, after all – there was no Bluetooth in my ear and definitely no reception for one to be talking to anyone. I would momentarily break from my philosophical discussion with the clouds and tell them that I was spacing out and trying to scare the bears.

I guess Atheists have to pay for a psychologist. Maybe it’s worth the ease at which their minds get to glide through life. I don’t like the argument that Atheists are immoral. You don’t need God to be moral and it seems like the opposite actually. It seems like the evil things done in the name of God far outweigh the things done in the name of Atheism. You may make the argument that the Communists were Atheists and Stalin managed to kill 80 million people, but it’s doubtful they did it in the name of no God in existence — they did it because they wanted to control the world vodka market – which seems to be against capitalism, so why not?

← Guide to Yeshivish Kiruv
Do women go on tefillin dates? →