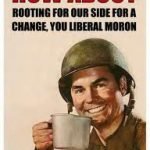 Whenever I talk to left wing Jews they always elicit some sort of shock when I tell them that finding a frum liberal is next to impossible. I’m not talking about modern orthodox Jews here, I’m talking about right of modern, black hat – wig wearing Jews who overwhelmingly tend to be right wing, far right wing in fact and tend to argue that you cannot possibly call yourself frum and be politically liberal at the same time. They say it’s impossible, because so much of what the liberals espouse is against the Torah and when you do meet a frum liberal there must be something seriously wrong with them.

My father is a classic frum right winger, he listens to talk radio, reads the NY Post, Yated Neeman and watches fox news. When I try to ask him why he doesn’t take a look at other political views to see what good ideas they may have he scoffs at me and asks me why he would want to read something he disagrees with – many people are like him on both sides of the coin – although I always felt that to produce an informed opinion, you needed to be informed. Both sides are agenda ridden and basically propaganda, everyone wants you to agree with them, but I just don’t like opinions formed from one sided views in the first place.

My father, like many orthodox Jews, bases his political leanings on the Torah. The Torah is apparently against gays, abortion (not so simple), immoral behavior and is pro-death penalty (unless you did teshuva with a lubavitch Rabbi and than started a really good publicity campaign) and if you try and argue that not everyone holds of the Torah the classic response would be that they have to keep the sheva-miztvos or they are chayiv misa anyway. I guess I may be a blasphemer, but I don’t believe in forcing others to adhere to my religion or religious standards in general. One of my biggest fears for America is that the Evangelical Right-Wingers take over and create a theocracy and start to force their religious ideals on the Jews and other denominations in America. That’s what would happen if everyone took this same attitude about voting according to scripture.

Of course, I understand the right wingers too – I just feel that forcing anyone to do anything blows; maybe that’s why I identify more with lefties than righties. The funny thing is, I kind of have a love/hate relationship with liberals. I hate extreme liberals for their fake tolerance, just as I hate extreme right wingers for their crazy “morals” that force everyone to follow their morals – but I digress – I’m curious about frum liberals.

The few black hat or frum liberals I have met have all been very learned in both talmudic and secular studies and they have been very intellectual. Every frum liberal I have met was a brilliant debater and enjoyed stumping right wingers at their own game and they have all maintained that if frum people would read more and expand their minds that there would be a larger frum and politically liberal community – yet in most cases – if you mention liberal you get this nasty tone from people telling you that all liberals are sick and immoral people.

← Frummies!!!
It’s official Pomegranates do not have 613 seeds →

109 comments for “Can you be frum and liberal?”