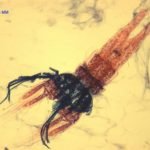 After a Reditt user uploaded photos containing microscopic bugs found in New York City’s water supply, Rabbi around the country gathered around high powered microscopes and came to the shocking discovery that there are bugs everywhere, word in the shtetl has it that they have been debating what to do about breathing.

According to sources inside the orthodox Rabbinate, banning air is simply not possible. For example, when they tried to to ban the impossible, things like TV and Internet, it backfired, people merely ignored the ban or tried to hide their illegal internet and TV usage. It seems that air may be similar, some sources say that Jews may soon have more in common with the Chinese besides for supporting their restaurants on Christmas – many people believe that the Rabbi may require masks that filter out these microscopic bugs so people don’t transgress sins as they go about thie rdaily activities.

According to the Torah, eating a bug is on the same level as cheating on your taxes and screwing a horse – no wonder why the Rabbis are up in arms. But the dilemma is great, how will people breathe? We have heard that breathing has been a chukas hagoyim theological debate for years – with certian rabbis wondering if Jews should breathe differently than the goyim. It is customary to make believe that the Jews invented certian things like music and foods so they don’t transgress the sin of doing things like everyone else.

Basically the bible commands that Jews be the best anti-conformists there are, I just hope the Rabbis don’t go hipster on us while trying to figure out a way to ignore the fact that there are bugs everywhere.

← Rant: The folks who need to face due east while davening
Stuff off the derech people like →

72 comments for “Rabbis discover that there are bugs everywhere”