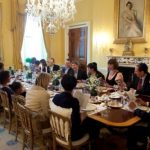 My nose was filled with sweet cologne as two men sat in back of me, I could smell them as soon as the door to sanctuary swung open, before they proceeded to sit down and insult my nose with their overdone cologne and rapid fire whispered Hebrew I could tell they were Israeli, I wondered if whispering was possible for Israeli men, I shifted in my seat and turned around to look at them trying to give them the hint that shul wasn’t a place for idle conversation, especially if I couldn’t understand anything. Shul talking is bad enough, but at least if you can hear what they are saying you may hear some interesting tidbits about how much their wives new sheitle cost or what a heartache it was to waste half your salary on yeshiva tuition for a kid that didn’t have the courage to say ma nishtana to the seder table. I delved into my book and quickly zoned them out.

Shul is really that much better when you have a good seat, no one to bother you with annoying shul jobs like pesicha or gelila and a good book. Let’s face it, the laining over the shlosh regulim isn’t exactly to die for, sacrifices are great, but besides for making up sexual innuendo about the shank bone there really isn’t much to say – so I did what any man with severe shul attention disorder would do, I found a good book in the library. This was a feat in itself, because the library in Adath Israel is geared for learned people, amaratzim like me who need to read an English mesilas yeshurim to be koveah ittim aren’t exactly the types that swoon over mishna bruras and mikroas geolos sets, but give me some gadol biographies, local secular Jewish newspapers, a few tattered copies of mishpocha magazine and shul flies by.

Don’t get me wrong, I am down with davening and lately my davening has become really meaningful mostly because Northern California was blessed by God and is the most beautiful place I have ever lived, so I can’t help but feel grateful toward the lord. Still, I feel restless in shul and a good book with some good lessons is something that really takes the pain out of shul, and maybe some ladies behind the mechitza to look at every once in a while to sooth the eyes.

I was super psyched to have the entire row to myself, the movie theater style chairs weren’t as comfortable as the weekday sanctuary, but they worked. On the first night of Pesach, one of the local kids that drank escaped to NY after drinking the Baal Teshuva koolade got up to speak, I immediately went to sleep and woke up as he was finishing – the seats proved to be of good support for a power nap and I gave them a new respect. I figured they had to be supportive, why else would half of the men in shul be over 80? Trust me, once you hit a certain age you want a good seat, the type of seat that old men sit down and then make grunting noises and start complaining about their joints once they sit down fully.

I wondered what happened to all of the middle aged people, everyone in shul was pretty much under 40 with a couple folks who could be in their 50’s but the crowd was predominately split between young and old. I myself am a big fan of older folks, in general I like them better, they are more relaxed and usually have funny sex jokes to tell, they also have cool accents. I always feel more comfortable in a shul when there is a good seized older folk’s population.

On the first day of Pesach an older dude davened musaf and it was awesome. He sounded like he should have been on the platform of a shul in Kovno davening musaf as the lynch mob banged on the doors demanding that the Jews come out so they can get the pogrom over with, I am seriously addicted to shtetl imagery and this guys accent was great. I also loved the fact that he ran through birchas kohanim but the one kohen didn’t keep up with the chazzan – kind of interesting. On the second day of Pesach the chazzan almost fainted during musaf – I think there may have to be some sort of age limit for certain prayers, thank God none of the kollel guys were there, I can imagine them bickering about someone taking over in the middle of musaf and forcing us to wait for hours while the old dude felt strong enough to continue with musaf.

Communal sedarim are all the same, they always seem rushed and they never really seem like a seder – mostly because they are rushed, so you don’t truly feel the exodus. In my mind the exodus is best felt when you finally finish magid and get to the eating portion of the seder. Since the entire shul partook in the seder I didn’t really have a choice, I was kind of looking forward to it actually – and I got more than I bargained for.

One of my BT friends decided that her completely secular and his non-Jewish fiancé should go to the seder, he said yes and I had to hide my anger, laughter and general interest the entire night while I decided how much I could write about the experience of watching a gung ho baalas teshuva try to convince her secular brother that orthodox Judaism was the way to go. Before I even met her brother I could tell it wasn’t going to fly based on the fact that the non-Jewish fiancé was a true beauty, she was simply way too hot to be Jewish.

While all of this craziness was going on someone brought up politics, knew the secular brother and the BT girl were very right wing and that my hosts were left wing and I waited for sparks to fly. Some conversation about Nancy Pelosi and the impending violence died down – I was at a seder once where my dad offended our liberal tables mates so much that they decided to request a different table.

Unlike New York, I haven’t seen people really discuss politics at the shabbos table. In fact I haven’t heard people discuss politics at all. As with most places, the orthodox Jews tend to be right wing and everyone else left wing. At lunch the first day I witnessed what was probably the most peaceful, intelligent political discussion between opposing viewpoints in my life. The health care bill was brought up and multiple views were brought up, the classic “I don’t want to pay for someone else’s insurance” was brought up and the opposing viewpoints were a little different coming from two doctors who witness the US medical system first hand and are of the opinion that health care costs will go down for all once the bill realizes its goals. On most issues I don’t formulate an opinion until actual things start to happen – a bill passes, big deal, I want to see what actually happens. The Republican couple was backed into a wall when they stumbled over the fact that care is always provided regardless of whether you have insurance or not – so the taxpayer and insurance holder covers the costs of folks without insurance.

The discussion was so peaceful and interesting, I tried to recall if I had ever seen a right vs. left wing conversation that any side could get a word in. Then at the second night seder, the hosts simply said that they had two Republican encounters over the holiday, every guest at the table besides me gasped, looked at the host in wonder and then continued with what they were doing – so strange these Californians.

Speaking of the second night seder, it was awesome. I think it was so awesome because there were no kids there, I have decided that kids ruin the seder, justifying that 15 grand you spend on Jewish education with a lengthy ma nishtanah and stacks of parshah sheets is too much for me and my second night seder was by far the most intellectual seder I have ever attended and the food was damned good too – I just hope they don’t ban quinoa, because I would be willing to bet you that banning quinoa is in the minds of the Rabbi.

Unfortunately I cannot really go into details about the sedarim – too many people know who I am here and with fame comes some sort of responsibility. There were three popular internet personalities at my second seder, and I can’t really describe the discussion to you, you would have to been there – but I learned a lot of neat history about the seder and reasons of doing things. First night seder, I was the only one who didn’t go to an Ivy League school so naturally discussion was pretty good as well.

Second day lunch was at the Rabbi from Adath Israel’s house and he had what seemed like the entire frum singles community of San Francisco over. Some of the folks were guests from out of town, but it was 3 single guys and 6 singles girls – the shidduch crisis has reached the west coast. While I am on the subject, I have noticed that there are Nebs in the bay area – they simply don’t exist, which is interesting because based on my experience, out of town communities are filled with Nebish people. Did I mention that shuls in the bay do not clop the bimah for ya’ale v’yavo and other shemona insertions and that nobody mumbles the insertions out loud during shemona esrei to remind you how fast they can daven? It’s pretty crazy not to have the clopping reminder and the people competing for clops.

No pesach is complete without food – here is the menu of the first days – good thing the folks in the Bay area love their food, can cook quite well and are located close to some of the best and freshest produce in the world.

The first night seder was a large catered affair, I kind of freaked out when the first course came out and it was gefilte fish from a jar, I wanted to say “you’ve gotta be trucking kidding me” but I waited and eventually was able to have 3 bowls of the soup, the matzo balls were dense but good. For the main course they had turkey with a rosemary gravy, mashed taters and tzimis. Desert was this extremely dense cake with honey and walnuts, I heard some complaints but I was down.

The second seder was really the highlight, the folks I stayed by don’t eat much meat for ethical and halachic reasons, they ordered organic grass fed beef from KOL and I’m telling you this meat was good – it didn’t hurt that my hosts are into food and know how to deliver. The meat was drowned in some sort of brown liquid gravy that worked out so well with the quinoa. Then there was this parsley pesto, cooked beets, carrots and parsnips and brusel sprouts – thank God for the greens – I really need my greens. Second day lunch was totally pimp, and the rebetzin made this mousaka which had ground beef, tomatoes and eggplant – I just wish there was more of it. The desert was totally pimp, the rebetzin is known for her deserts, I don’t even like chocolaty things, but this was a mouse/cake and combined with the strawberry fruit salad I was totally in heaven.

← Why is it so hard to find kosher for passover matza?
Stuff Jewish People Like →

10 comments for “My first days of pesach were awesome”