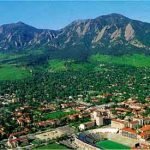 The first time I came through it, I fell in love with Boulder, Colorado. My buddy Berel and I had been on a two week backpacking and mountain biking trip in Montana and on our way home he decided we should go meet his friend from Israel. Had I known at the time of the vibrant, albeit small, Jewish community, I may have stayed longer. Either way, I was impressed. The main street of downtown Boulder is one of those red bricked closed to car affairs, teeming with people, musicians performing on every corner, children playing in the many playgrounds located in the middle of the thoroughfare and lots of neat stores. Though some chain stores like Urban Outfitters, Starbucks and Ben and Jerry’s have crept in, there are mostly arty type affairs, outdoor gear shops and really yummy looking treife restaurants.

Boulder is literally on the foot of the Rockies — the main streets all end right at the mountains with several snaking their way up to towns located thousands of feet higher than Boulders already impressive 6,000 foot elevation (unimpressive for Coloradans, of course) The second I found out there were frum Jews in Boulder, I like to think that I convinced my brother to move there. Really he convinced himself after he visited, hung out with the Jews and realized you could rock climb some great crags without ever hopping in your car.

Boulder Colorado has 3 orthodox shuls, a mikvah, an eruv, day school, kosher bakery and a small JCC. Did you know that 10% of Boulder’s population is Jewish? No, they aren’t frum, but it’s only time before someone other than chabad (currently, there are two of them) figures it out and tries to add to the community. Unlike many similar sized communities, Boulder is not rife with communal politics. Everyone gets along, shares in simchas, attends each other’s shuls and all the rabbis of the city meet regularly to talk about stuff. Of course this may be because Boulder is super friendly and everyone generally tries to get along, down to the homeless people. Even they are cool in Boulder.

Boulder is also the birthplace of Renewal Judaism – which is probably heresy, but people in Boulder absolutely love Rav Zalman Shechter who sometimes pops his head into Aish Kodesh the other non-chabad affiliated shul. All I can tell you about Renewal is that based on the “minyan” I walked in on at Isabella Freedman Center, I simply didn’t like it – not one bit. In fact, it actually drove me mad and I wanted to jump up and tell everyone that they were full of shit. But firmly in my role as an observer of people in their natural habitat, to gather ammunition to mock them with later, I sat still and let everyone do their thing. I have heard several people say that Rav Zalman may be one of the only real Apikorsim alive today, since he was one of the prize students of the Frediker Rebbe (previous chabad Rebbe) but no one has actually verified that he is smart enough to be considered a heretic. Rav Zalman also teaches at Naropa University which is home to a large population of Jews – rumored to be as high as 40%. Naropa is a Buddhist university that seems to only have courses devoted to some sort of therapy.

The campus of Colorado University is located in Boulder as well. C.U. gives the city a distinct college town feel since it seems that everyone in town is in super good shape and everyone is a cyclist. My friend who is a Beriatric Surgeon said he would love to live in Boulder, but there aren’t any fat people and he would go broke. The Chabad-on-campus guy is awesome. I have found that in order to be a chabad on campus guy you have to have this somewhat modern flare, any old chabad shaliach just wont do. This particular C-O-C, Rabbi Ysiroel Wilhelm, is a rocking guy and it doesn’t hurt that he has loads of stuff to tell me to write about every time I see him.

There is no regular old shul in Boulder and this may be one of the reasons anyone moving to Colorado would probably choose Denver located 35 minutes drive to the south over Boulder. Still, the non-chabad shul is an interesting place. The Rabbi is Bresslov and very into Chassidic practice, in the traditional way, not the current in my view bastardization of Chassidism. This means lots of stories, lots of singing and dancing but women who wander into shul wearing pants aren’t going to be bleached and he doesn’t believe in banning concerts or forcing anyone to do anything they don’t want to. Boulder is quite the liberal place and I overheard a bunch of people in shul talking about how wrong it was to separate the women. The mechitza is over regulation; you cannot see the women at all, although during speeches it is fully opened.

Asking a question like “how many frum people live in Boulder?” is especially difficult. I was in shul this morning and the crowd was pretty large for Aish Kodesh at maybe 35 people so the Rabbi decided to make a separate mi-shebarach for Jews and non-Jews. I have been in the shul with 14 men present and there was no minyan. As expected there are many intermarriages, even at lunch today I ate with a couple, where the mom was obviously not Jewish.

So how many frum people are there in Boulder? I would say, maybe 10 families, but that number is incomplete. I am sure that there are many Jews who are flexidox or knowledgeable but not practicing and everything else under the sun. In fact this past Friday night I ate by a young couple that picked Boulder for it’s outdoor community, they are both yeshiva educated and from frum families, but they love the outdoors and liked the small community. They had quite a number of guests, including 3 who were ex-black hat yeshiva guys, while they attend non-orthodox shuls, they still will make appearances at the orthodox shul, as well. This is greatly contrasted in most larger communities. It seems in Boulder, people are less judgmental and more real.

If Missoula, Montana had any orthodox Jews that would be my choice place to live and raise a family. Since it does not, Boulder, it is. Boulder is not the least inexpensive place to live but by New York standards, it is more than affordable. A one bedroom can be had for $600 a month and you don’t need a car to live there. In fact, I don’t know of any other place that has a frum community that you can ski, mountain bike, backpack, kayak and gain entry into thousands of square miles of wilderness without a car. Really, just doesn’t exist. With Denver and it’s larger community and kosher restaurants and yeshivas only a 35 minute drive away, I cant help but wonder why Boulder isn’t home to some sort of Outdoor Nut Kollel or yeshiva for off the derech kids to explore the outdoors or whatever.

I was standing outside of shul today at Kiddush. Sidebar: the Kiddush was really aesthetically pleasing but is one that can clearly never be considered heimishe. Fresh homemade guacamole, humus, smoked pepper salad, raw carrots, broccoli and of course the Gluten free products that everyone in Boulder seems to be so hung up on (first it was carbs now its gluten – what will someone attack next?) and all of the cups, plates, napkins and cutlery were made of corn and compost-able. The Campus Chabad Rabbi (who it seems was there because the semester was over) with his peyos fluttering in the wind,Rabbi Silber of the Drisha Institute there for a visit, along with a woman wearing a large yarmulke, men with all types of clothing and yarmulkes, some men in suits, others in jeans and me in my corduroys – the women wearing everything under the sun all contributed to the odd scene. But what topped it off was the fact that not one person (even I held myself in check, though it made me insane!) knocked anyone down when Kiddush commenced.

← Why have the Rabbis been silent about Leib Tropper?
What if moshiach were modern orthodox? →

103 comments for “Boulder Colorado has my almost ideal Jewish community”