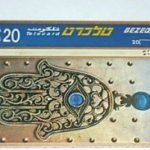 First it was kosher cell phones and now its kosher phone cards, and judging by these two tidbits of information and the time and money spent to make these products one may conclude that Charedim in Israel are going off the derech because of their cell phones, I have no idea how this is possible, but trust me they think its happening.

It must be real bad if that many Charedim are calling sex numbers with their calling cards and cell phones to have to come up with kosher items. I myself have never called a sex line, mostly because I don’t find it too hot to talk to some skanky woman on the phone and because I would never pay for anything of that nature, unless you count shidduch dates (but I swear they are forced on me by my ocmmunity)

Seems that the only people who will buy these kosher calling cards and kosher phones are of the ilk that doesn’t call sex numbers in the first place. What about all the private lines, I wonder if the phone will detect if its owner is calling a member of the opposite sex. Will the phone be able to determine the callers heart rate to see if theres a sudden jump?

I have some other ideas for kosher phones and calling cards.

There can be a niddah calendar built into the phone

When you dial a sex line the phone can taze you

Sex lines are redirected to dial a daf

Kosher phones have tzitzis on them (4 cornered you know)

Charedim ban the story of Esther

Chumra of the month club

← How did “ish” make it into Yeshivish?
Frum Satire show on the upper west side →